In it Together - Devoted Resolutions 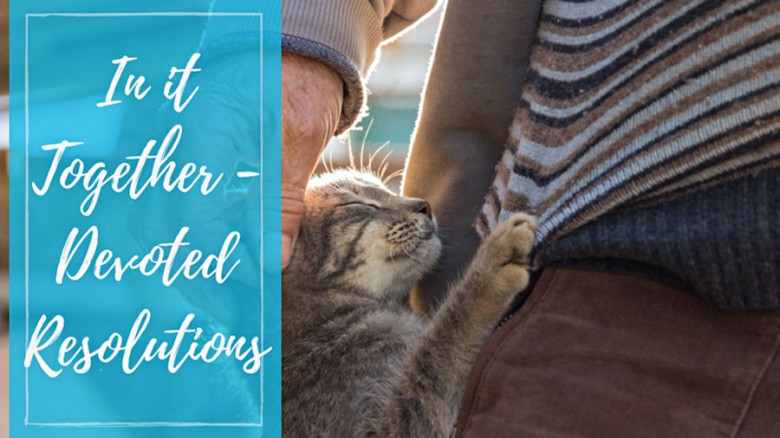 It’s a new year, and you have vowed to get in shape and improve your health. Although you might have made this resolution before only to fall back into old habits before the end of January, you mean it this time. The good news is that having a pet gives you even more motivation to achieve better health. Not only does the love of your furry companion give you the incentive to take better care of yourself, but it encourages you to improve your pet’s health as well.

Commit to Pet Health and Wellness in 2018

While you can make decisions about what you eat and whether you’re going to exercise, your pet depends on you to decide such things for her. For example, she has no control over what you pour into her food dish. Ultimately, it’s up to you to set the pace and expectations for both yourself and your pet. Here are five pet wellness tips to keep in mind for 2018:

Your pet is a loved and valuable member of your family, so it only makes sense that you want to buy him a special holiday gift. If you decide on a toy, we at Glencoe Veterinary Clinic would like to remind you of the following important safety considerations:

You may have heard that one year in a dog or cat’s life is equivalent to seven years for a human. That isn’t quite accurate. According to the American Veterinary Association, the aging formula for companion animals goes more like this:
No matter how you calculate it, there’s no denying that dogs and cats age significantly faster than people do. Many begin to experience health problems associated with middle age around age seven and officially become seniors by age ten. That’s why we recommend more frequent preventive care exams for pets starting around midlife. When you consider that one year is like five years for an older pet, it makes sense to come in for a check-up at least twice a year.

Common Health Issues in Senior Pets
We tend to diagnose these problems more often in middle-aged and senior dogs and cats than we do in younger ones:

Arthritis: The cartilage in bones acts as a cushion to prevent them from rubbing together. The normal aging process causes the cartilage to wear away, which leads to inflammation and pain. Some indications your pet could have arthritis include loud vocalizing when you pick her up, stiff gait when walking, reluctance to jump, and over-reliance on some limbs while avoiding using others.
Cancer: The three most common types of cancer in cats include squamous cell carcinoma, lymphoma, and soft-tissue sarcoma. Dogs present most often with hemangiosarcoma, lymphosarcoma, and osteosarcoma. Look for early signs such as unintended weight loss, low energy, behavior changes, and slow-healing wounds.
Diabetes: Aging, obesity, genetic inheritance, and several other factors can cause the pancreas to produce inadequate amounts of insulin, which gives your pet energy. Typical symptoms of diabetes in pets include irritability, increased need to urinate, fatigue, unintended weight loss, distorted vision, and increased water consumption.
Kidney disease: Toxins can start building in your dog or cat’s kidneys and cause a gradual loss of vitality. Your pet needs healthy kidneys to properly eliminate waste products. Waste material remaining in the body can cause dysfunction. Symptoms to look for include soiling accidents, vomiting, weight loss, fatigue, and increased desire for water.
Senility: Cognitive changes affect at least half of all senior dogs and cats. Your pet may display agitation, aggressive behavior, or anxiety that he’s never shown in the past. He may also forget skills he’s already learned. Soiling accidents are common at this stage.
Help Your Senior Pet Age Gracefully
Bi-annual preventive care exams at Glencoe Veterinary Clinic allow our veterinarians to detect and treat new health issues as soon as possible. Remember that dogs and cats are masters at disguising pain and that you might not even notice anything is wrong. This goes back to their evolutionary need not to appear weak to predators. The sooner we spot an issue, the sooner your pet can feel better.
read more...
Previous 1 2 3 4 5 6 7 8 9 10 11 12 13 14 15 16 17 18 19 20 21 22 23 24 25 26 27 Next