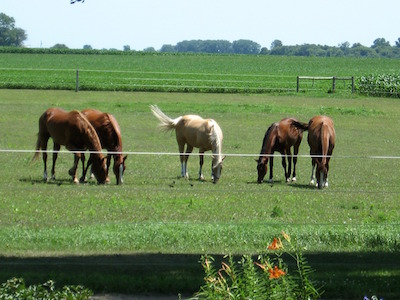 The American Association of Equine Practitioners (AAEAP) has developed new protocols for deworming horses because of the following factors:

The AAEP found that frequent treatments are unnecessary and can lead to resistance in the parasites. For this reason, they recommend:

They also have several suggestions for parasite control:

In general, let us work with you to design a parasite control program within the needs of your farm. By using fecal tests and parasite-specific deworming plans, we can work together to keep your horses free from internal parasites! Call us today to begin a customized parasite plan for your farm.

Springtime! A great reminder for your pet's annual exam!

It’s almost spring! Time to check for heartworm disease! Schedule your pet’s yearly checkup today! It’s March”springtime is around the corner! Worms in your garden…and worms in your pet? Eeew! Hold on, let’s explain…

The worms you find in your garden mulch are not the same worms that cause heartworm disease in pets. Mosquitoes carry heartworms. And all it takes is one mosquito to bite your pet to become infected.

Here’s the good news about heartworm disease. It’s an illness that can be easy and aÂ­ffordable to prevent. The bad news is, if you don’t prevent it the right way, your pet is at high risk of getting sick. Heartworm disease is dangerous to your pet and some signs of the illness are tough to spot. Your pet may be acting fine, but they may have so many heartworms inside their body that it can become life threatening.

You may be thinking, “my pet stays indoors, so there’s no need for heartworm prevention.” But, heartworms are carried by mosquitoes, which get into everyone’s homes! One mosquito bite is all that’s needed to spread the disease to your furry friend.
Schedule your pet’s yearly checkup with us. We’ll do a thorough exam, including a simple heartworm test, to make sure your pet is at his/her optimum health. And we’ll talk about the best way to prevent heartworm disease, so your pet stays healthy, happy and safe!

Make an appointment for your pet’s annual exam today!

THE DANGERS OF REED DIFFUSERS TO OUR PETS

Do you or anyone you know use reed diffuser’s in their home and have small children or pets? As a veterinary technician I knew that various chemicals can be caustic to humans and animals. I came across this article posted by LoveCats World and realized that people need to see the dangers in this product.

An office cat named Dewey had knocked over a cinnamon reed diffuser and the staff had saw it right away and cleaned him up immediately. They thought that the oil had just stained his fur and didn’t see what was actually going on beneath the surface. The oil had caused chemical burns to Dewey’s belly and the inside of his back legs. The severity of the burns did not show up until about a week later.

This is Dewey while recovering. He had spent 5 days at a veterinary clinic and had to be put under anesthesia to ease his pain whilethe wounds were debrided and cleaned. Dewey will eventually recover completely but, what if he would have ingested the chemicals or if they would have spilled on his face. In that case Dewey might not have been so lucky.

The reed diffusers are beautiful accents to home décor but make sure they are not accessible to pets or children. Their safety comes first. Please share to your friends and family.

Credit given to lovecatsworld.com and snopes.com.